My daughter is a competitive dancer. She’s 15, and has been dancing since she was around 3. She’s gone to countless dance camps, workshops, and of course classes. So I have been a dance spectator for about 12 years. Prior to that I knew next to nothing about dance, save for the fact that I have never been any good at it.

At first, dance was pretty much entirely about how cute the kids all looked executing choreography. They got to wear these elaborate costumes and perform for friends and family at recitals. The teachers and teaching assistants are always on stage at the same time as the kids, and the kids essentially never take their eyes off them, mimicking the movements they’ve all spent months in class learning. It’s exceedingly adorable, and naturally every person who comes to watch immediately rushes to them afterwards to tell them how wonderfully they danced. In short, it’s a typical exercise in getting kids involved in an activity that provides some structure around working toward a goal, and then the kids get congratulated on essentially existing for the duration. And it’s awesome.

As the years progressed, we saw less and less boys involved. I won’t attempt to analyze that or comment on why it might be, but political minefield notwithstanding, it is true. This meant that as the dancers grew, it became – for my daughter’s group at least – a girls-only activity. 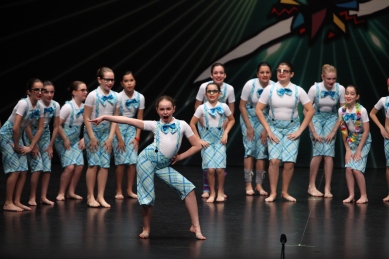 Starting around the age of 8 or 9, and lasting for 3-4 years, it starts to become obvious which of the girls are well suited to dance and which are not. This obviousness is not lost on the girls. Dance becomes a micro-society where “Haves” and “Have-Nots” start to identify, and the behaviours that result are what you would expect. In a way it mirrors what is happening at that age in school, but from where I sat it was definitely magnified at dance. These can be pretty difficult years for the girls, and perhaps more so for the parents. As I watched from the sidelines, I always told myself that whether a Have or a Have-Not, there are very valuable lessons to be learned from these dramas, and whether my daughter was receiving or giving grief (it certainly seemed she was receiving a lot more than giving, but nobody ever accused a dad of being impartial), my wife and I always did our best to ground her in reality and look for the long-term life lessons that could be taken. I do think, subjectivity aside, that I can safely say my daughter began to show real talent for dance during this time. I can also say, objectively this time, that she emerged from this phase with an inner-strength and confidence that is astounding. As I watch her navigate the social quagmire of the tenth grade, I am exceedingly proud and awed at how well she manages to stay true to herself and her friends, while gliding above the drama that can consume most kids of that age. She never judges others, and always stays honest in helping her friends deal with whatever the current issue is. In and out of the dance world I have watched her handle victories with honest grace and compassion, and failures with resolute determination. She’s my hero, and I firmly believe we have the “emerging talent” years of the competitive dance program to thank for that.

From Girls to Women
As the girls mature into women, things change at dance in a way that I could never have understood if I were not so immersed in it. This phase is not something I came to understand only as my daughter entered it – the nice thing about being a dance dad is that every recital and dance competition you attend features dancers from all the age groups. So that long before my daughter was in high school I have been observing this stage of a dancer’s development. I also have the added advantage of being a high school teacher, and so for my entire career have had the pleasure of seeing how dancers take the lessons from dance into seemingly unrelated arenas, like a math classroom, which really is my domain. Having a daughter in dance always made me pay attention to how older dancers behaved, kind of as a way of glimpsing my daughter’s future. Here are some observations I’ve made over the years, and observations I have now had the pleasure of seeing manifest in my own daughter.

Dance is a Language
This is not metaphor. Dance actually is a language. It took me some time to fully appreciate that. Because of my daughter’s involvement in dance, our family has been 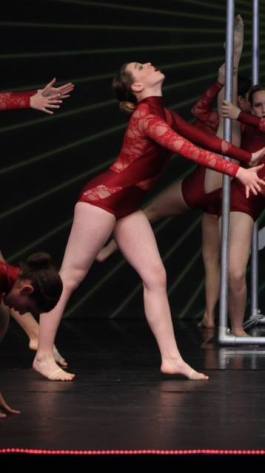 watching So You Think You Can Dance since season 2. It’s a great show to be sure, but I admit at first I was too absorbed in marveling at the physicality of it to understand what it communicates, despite the fact that the judges on the show really do a great job emphasizing this (I always assumed they were saying it metaphorically). But like a child that learns to speak simply from hearing the spoken word and contextually absorbing meaning from the sound, I began to absorb meaning from the movement. The first thing I realized was that unlike languages that use words, dance doesn’t translate to any other language, and communicates things which can’t be communicated any other way, with the possible exceptions of fine art, or poetry. Really good fine art will enthrall and speak to the viewer through infinite contemplation of something static. Really good poetry succeeds at using words which individually can be quite linear, by combining them in a way to create depth and consequently say something the language the poem is written in was not necessarily designed to say. Really good dance? A different thing entirely. It speaks to our humanity on multiple levels, and the fluidity of it allows the choreographer/dancer to tell us stories no written word could approach.

Words are discrete, and a picture is static. But motion is a continuous medium, and the very continuity of it results in an infinity of expression within a finite frame of time and space. It has been said that dance is poetry in motion, but I honestly have come to see it in the reverse. Poetry is dance stood still. I can’t find words to describe this any better, because words will fail here. If you want to know what I mean, watch dancers. And in the same way that second and third languages improve thought processes and imagination, so does dance – but it does so in a way that is magnified a thousandfold because of its unique method of delivery, and because of the world of thought and emotion it opens up for communication. It also is unique in that you don’t have to be able to speak it to understand it. You only have to watch.

Dancers Make the Best Actors
Because of my passion for theatre, I have had the immense pleasure of being both actor and director in various musicals. And here is what I’ve noticed – not all great actors are dancers, but all dancers are definitely great actors. To me there is no mystery as to why this is. Many actors focus on the words they’re saying or singing, trying to pour all of the character they’re portraying into the delivery of the lines or lyrics. Physicality is often an afterthought, or a simple by-product of the emotion they are feeling about the performance. For dancers it’s entirely different. Because of their fluency in dance, they are simultaneously vocalizing and dancing the performance. By dancing I don’t mean the choreography that often accompanies musical numbers, although naturally a dancer excels there. Rather I mean that they are speaking to us in two languages simultaneously. And even those of us not able to communicate with dance can still understand it. So I have often found myself thinking of a dancer “It’s not a je ne sais quois she has. It’s a je sais qu’elle est une danceuse” (yes, you have to speak some french for that one  😉 ).

Dance is Empowering
Okay. So obviously dance results in physical fitness. You can always spot a dancer by their muscle tone, posture and grace in simple movement. The importance of this can’t be underplayed. But the kind of empowerment I’m talking about here is more than that. I

remember once at a dance recital there was a senior acro small group number about to start (see what I did there – Dance Dad knows the terminology). It was clear from the opening positions that one of the dancers was going to execute a crazy trick to start the dance. Before the music started there were hoots and hollers from the wings and from the audience, and one dancer’s voice from the wings rang out with “You GO girl!”. I was momentarily taken aback. I think maybe I had just read an article or watched a show where that phrase was called into question as demeaning to women. And then I looked around. The stage and venue was dense with strong, confident young women, certain of themselves and certain of their power. And the dancer who called it out numbered among them. I couldn’t see anything demeaning at that point about what she had said, but on a deeper level I realized just what dance had done for these kids. It showed them what inner strength, determination and dedication could do. And so naturally I began to think about the dancers I’ve taught in my math classroom and I had this moment of revelation. It is exactly that quality that has always made them stand out to me in that setting. Not that they all excel in math, because not all kids do. But that regardless of their abilities in math, there is always an inner strength and peace that says “I know who I am, I know what I can do, and I know how to commit to improving.” Where many students in high school still need the explicit motivation that our culture seems to thrive on too often, the dancers have internalized their motivation in the best way. I can’t say enough how important that is for success in life.